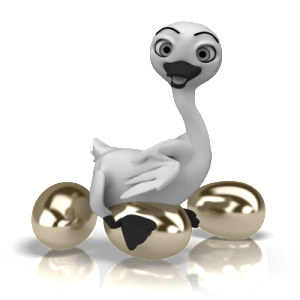 “To kill the Goose that Laid Golden Eggs” is a famous idiom from Aesop’s fables, numbered 87 and has been an inspiration for me over the years. Lately, it has gained even more of my mindshare as I reflected on it from a couple of perspectives — the farmer and the goose, as it relates to our everyday choices. In the first of my two part blog post, I will share my reflections as an observer watching how this story unfolds almost everyday in so many organizations. In the second post, I will explore the various avenues that are available to us humans that were unavailable to the goose, and those we still choose to ignore.

I am almost sure that you have heard or read the story about the farmer who killed the goose that laid the golden egg.  There are so many versions of this fable. For those who haven’t or simply need a refresher, here is a version that conveys the moral …

A farmer had fallen into poverty. He had been rich, having inherited the farm and many possessions, but sold them all to avoid having to work. Now he only has one goose, which he plans also to sell.

However, the goose lays a golden egg, which the farmer is able to sell for a lot of money.

Further golden eggs follow, and the farmer becomes rich again. Consumed with greed, the farmer wants to get all the golden eggs at once, and cuts the goose open to get at them. There are no eggs there, and now that the goose is dead, no more eggs to come.

I have been reflecting on this story for almost a couple of months now from the vantage point of talent management and see a number of parallels between this story on a farm and what happens in organizations — both large and small. I see managers or owners of businesses engage in a similar act of ‘killing the goose’ or even worse ‘killing the geese.’  Obviously, they don’t see the parallel as most of them have heard the story of the ‘Goose that laid the Golden Egg’ as a child and “understand” the moral.  I place the word in quotes as many of us understand many things but don’t seem to apply them to our daily choices. In an abstract and expansive system like our world or society at large, many consequences take a very long time to manifest.  Unless we have a time-lapse movie that can compress ten to fifteen years into a short clip, we are at a loss to connect the real cause to the effect.  The delay makes us lose track of the action that lead to the events which resulted in the final outcome.  Instead, we tend to correlate an action closer to the outcome and establish a false attribution.

We all know that it takes a team to make big things happen.  A large team usually involves a range of folks starting with the founders or owners and those who are hired to fulfill certain roles within the organization.  Let us agree that good organizational design and hiring practices are essential to identifying the required positions and filling them with qualified candidates.

Having spent the time and energy to accomplish that, I still see many employers only viewing employees as a cost or as a disposable resource.  I remember attending a career fair many years ago when I was working at Carnegie Mellon University, where a recruiter proudly stated that their intention was to hire smart people, work them hard until they burn out and then replenish them with fresh blood.

Everyone has ups and downs and many have lives outside of work.  Employers who have taken the time to enroll and inspire their employees to engage in the vision of the organization seem to get a lot more commitment and loyalty from their people. When people dedicate a bulk of the waking lives in the service of an organization, it only makes sense for the organization to at least make sure that other basic needs that extend beyond money such as rest and time to attend to other aspects of their lives are provided for.

Human beings want to be acknowledged and that they matter.  Those who feel cared for and listened to will give a lot more of themselves to their places of work for years on end.  Unfortunately, while we may understand these concepts at an intellectual level, there are other hidden drivers such as fear, greed or our brand that steer many of us to go for the near term results and ignore our wisdom.

Until we truly believe and embrace the fact that each person on the team is key to the realization of the mission of the organization, I can’t seem to visualize a future where the goose does not get killed over time.

Up Next: Ebola: A flare to remind us that we are all connected