Hal Williamson: My inspiration – while alive and in passing

To Hal
The happiest man I know

I really wanted to honor this man whom I respected a great deal and always remembered when I was having a bad day.  Hal made sure that he punctuated my belief in him when I visited his home to dedicate my book.  He had fallen a couple of days before and shattered his knee cap and had a big gash over his left eye.  As soon as he saw me, he wanted to get up to greet me and was sporting a big smile.  At that moment, which I remember so vividly to this day, I felt so right about dedicating my book to Hal. 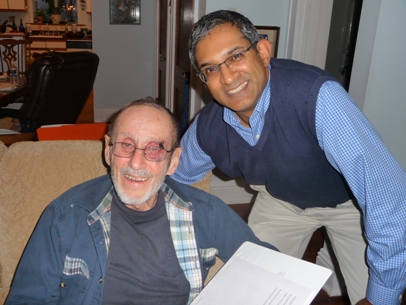 My book, Beyond the PIG and the APE: Realizing Success and true Happiness, includes 21 true stories organized into the six Life Spaces that we inhabit – Self, Partner, Friends & Community, Work, Money, and Kids.  In each Life Space, I have at least three stories that illustrate each level of Awareness ranging from Unaware to Semi-Aware to Aware.

Hal – My Hero is Hal’s story that represents the highest level of awareness that I have personally seen one attain over an extended period of time.  Hal demonstrated that level 3 state of awareness for over 10 years that I knew him.  He even acknowledged to his wife Sharon towards the end that he did not have to prove his worth or puff himself up anymore and that it was a relief.

I am including it here for those who have not had a chance to read it.

This story is about a remarkable man who has faced adversity with courage, smarts, and grace, and in the process has ended up enriching the lives of all he comes to know. His name is Hal Williamson, and he is the person to whom I have dedicated this book.

Hal experienced more heartbreak in his early years than many of us will face over a lifetime. At age nine he witnessed his older brother being burned to death in a house fire. On Hal’s eleventh birthday, his father was buried after losing a long and nasty battle with cancer.

Although Hal never really excelled in school, each year his teachers — sympathetic to the woes facing his family — would allow him to move on to the next grade. At least until he reached the eighth grade, when the school’s principal told his mom they had tested Hal and the results indicated that her son was “retarded.” Despite her best efforts to plead Hal’s case, the principal said they would not allow her son to graduate and advised her to send him to a trade school.

Hal’s mother refused to listen to the principal. She found the money to send Hal to a private school. Despite the extra attention offered there, he didn’t do well at first. The turning point came when Hal realized that he needed to work a lot harder than the other kids. He put himself on a rigorous study schedule that required waking up at 3 A.M., then studying after school until he went to bed around 8 P.M. By the end of high school, Hal was in the top of his class.

Things were beginning to look up. Keeping to the same study routine, Hal made further strides in life. He went on to college and earned a degree in mechanical engineering. He worked at the U.S. patent office while studying law at night. Soon he became a patent attorney and worked his way up to the executive suite. But despite these indicators of success, Hal never felt worthy. He actually felt he was cheating the system by secretly working twice as hard as his colleagues. To quiet his thoughts, Hal turned to alcohol.

Luckily, with support from a recovery group, Hal sobered up. His company not only kept him on, but even paid for him to get an MBA. Hal was regarded as more than a patent attorney worth keeping; his employer saw him as a person with great potential. However he did not get to realize that potential with this firm. After a company merger he lost his job entirely.

It would take a long time to find another position comparable to the high-profile one he had held. While searching for employment, Hal made a hobby of researching the brain and how it worked. He wondered if this knowledge could help him understand how he had been able to overcome adversity, and wondered if he could help others with the insight he gained.

Meanwhile, new expenses arose as Hal’s children grew up. To help pay their college bills he took a low-level patent attorney job. It was during this time he also developed a seminar on how to use your brain more effectively, called Pathway to Greatness. When he introduced it to his colleagues at work, it was met with high acclaim. Before long people across the country were signing up for his seminars. It seemed he had found a new calling, and life looked brighter than ever. But many more trials lay ahead.

While in Florida to deliver a seminar, Hal and his wife were taking a morning walk when both were struck by a car. Hal’s neck and leg were broken. His wife was killed instantly.

After this devastating loss, Hal recovered and dedicated himself to his new mission. He vowed to continue helping people use their brains to enrich the lives of many. After one seminar he met a woman, Sharon Eakes, who could empathize with losing a spouse. Eventually they married — and Sharon, also a psychologist and coach, became Hal’s working partner as well. Things were looking up again.

Unfortunately, Hal seemed to be a magnet for disaster. This time it came in the form of a wave of medical problems. Hal broke his hip in a freakish bicycle accident, lost his sight to a rare eye disease, and suffered a stroke. There were so many problems, his doctor referred to him as a “train wreck.” Yet Hal did not think of himself in such terms. At the time I write this, he has recovered well from all of these things—even regaining much of his sight through diligent practice of a system he devised for himself, from what he had learned of how the brain works.

And here is perhaps the most amazing thing about Hal. If you were to meet him, given his history of working very hard and rebounding from hardships, you might expect to find him an iron-willed and intensely driven person — a sort of Spartan prototype of stern self-discipline. Hal is indeed well disciplined but that’s not how he comes across at all. He radiates happiness and kindness. It is a joy just to be around him, for clearly he loves life.

Every day Hal wakes up excited to write, read, exercise, learn, and share his experience and knowledge with others. That is why, in the dedication to this book, I call him “the happiest man I know”!

With all the obstacles Hal has faced, he could’ve easily given up and let his Ego start to believe any of the labels that had been placed on him—retarded child, alcoholic, job-loser, widower, blind and disabled. But he didn’t. From early in life, he overcame and achieved success in the public’s eye. But obviously something was amiss for a number of years, as even with his early successes, he had to use alcohol to quiet his feelings of inadequacy.

Becoming unemployed and thus getting time to read and discover more about himself might have been the best thing to happen to Hal. Over the course of that time he became enlightened, finding what was really important in his life and what his true mission was. It wasn’t to obtain money and prestige. It seemed he’d been going after those things mainly to prove everyone else wrong. He was just letting his PIG and APE reinforce his Ego. As we’ve learned, that type of motivation can only take one so far, and often in the wrong direction.

Hal has learned to live from the big YOU, from a profound inner happiness. This happiness is the most reliable source of “strength” and “resolve” in the face of difficulties— because if you love life and know that you are a harmonious part of it, as Hal does, then naturally you want to go on engaging with life to the highest of your abilities.

Questions for Learning: When misfortune occurs in your life, what is your initial reaction? With losses such as the death of another, of course there will be grief — but here we’re talking about the setbacks that primarily “set back” your own plans, such as things not going the way you wanted them to go at work or in personal life. How do you respond? Is it worthwhile to find the state of being that Hal has found?

I visited Hal a week before he passed away and I had the most soulful moment of my life thus far as Hal held my hand for nearly thirty minutes.  I just was in his presence as he smiled so peacefully.  I am including my note to Hal and Sharon a couple of days later.

I reached India safely. There was a lot of quiet time on the plane, all by myself with strangers. My visit and spending time with you a couple of days ago has yet again transformed my life, thank you. My purpose to help people has only grown more after our deep connection. I truly experienced a Namaste moment (30 minutes) when we were together. No thoughts, no agenda – pure peace, oneness and blissful joy.

I cried a lot on the flight out of admiration and sadness, and I am crying as I type this. Hal, you have been such an inspiration in my life, I don’t believe you will ever comprehend what you have done for me and so many others. God bless you and your soul!

Please feel free to read more about this great man and the qualities that allowed Hal to live so well in spite of many a physical and emotional wounds.

Please also share other great stories of greatness that you have experienced in the comments below.

Up Next: New Year Resolutions: why don't most last beyond January?