Making Choices: The Third Choice — and a Third Level of Choosing

An Excerpt from my book Beyond the PIG and the APE: Realizing Success and true Happiness

Three is often seen as a magical number, as in “The third time is the charm.” And so it is with making choices. You may have noticed that when you’re mulling a decision and looking at options, very often it’s the third choice — the third option that comes to mind — which turns out to be the best.

There’s not much mystery to that. Many times when you sit down to make a choice, either alone or with others, you are faced with a yes-or-no, this-or-that type of decision. Should we eat out or stay in? Do I mow the lawn or watch the ball game? Even in cases with a lot of options, you’ll typically try to narrow down the choices by making a series of yes-no decisions. If you’re deciding where to apply to college, what about Penn State? You will either put that school on your list or cross it off. Then you’ll do the same yes-no process with Rutgers, Virginia Tech and a bunch of others, until you have a workable list of schools to which you’ll actually make visits and send applications. 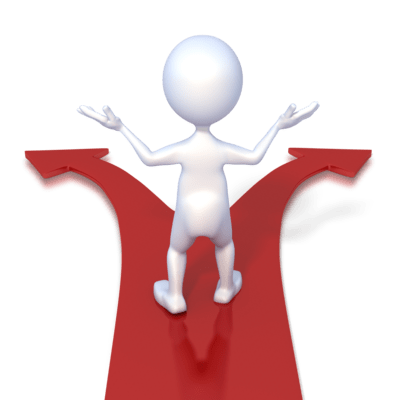 Here’s a trap, however. In any yes-no, this-or-that situation, it is possible to get locked into thinking that the two options in front of you are the only ones. Earlier in my life I thought the only two life options were to be a Grasshopper or an Ant. Or to alternate between the two, as in being a hard-working Ant most of the time but taking Grasshopper breaks to dissipate myself in fleeting pleasures.

In the story, the Ant is supposed to be the hero but who wants to be like Ant? She comes across as a total drudge. Her life is boring. As for Cricket, who chose the fun-filled lifestyle, he’s dead. Children and adults alike may well ask: are these the only choices? To be a terminal bubblehead or a grim and joyless Scrooge, damned if we do or don’t? What kind of universe is this, with no good options?

Sometimes there are in fact only two options: you can get on the bus before it pulls away, or not. But sometimes there is a third which may be a synthesis of the two, or a shifting of your frame of reference to see a higher-level option that’s beyond the two you thought you were stuck with. This is what happened for me when I discovered a way of living beyond the Grasshopper and the Ant.

And since the third option usually comes from a larger intelligence, a larger or more sophisticated point of view, it’s not surprising that it often turns out to be the “best.” That was my case as I experienced a higher level of being and awareness.

Now let’s investigate that further. If there is a higher level of being and awareness, might it not also be a higher level of choosing — a higher state from which to make choices? And if so, wouldn’t it be a good idea to talk about elevating to that third level, so that if needed we can make as many choices as possible from that level?

Of course it would. There are essentially three levels of choosing:

Just like having a higher level of awareness, we could always use a higher level of choice. Ideally, we want to make decisions that fall under “Level 3”. This is a space for solutions to create harmony in your life and our world.

Think about a time in your life when you were faced with “only two choices”.  Please post in the comments below how you were able to resolve or not resolve the situation at the highest level.

Up Next: Celebrating Life: Coping with Death - Ten years after 9/11