One of the most powerful movies that moved me to tears while inspiring me into action was Pay It Forward.  It stars Haley Joel Osment as a boy who launches a good-will movement, Helen Hunt as his single mother, and Kevin Spacey as his social-studies teacher.

Over the last two weeks, I have had to capture my own Pay It Forward movie, one that I witnessed without a camera with my own eyes over the last couple of years.  It stars my dear departed friend Senthil Kathiresan, who recently succumbed to complications following a heart attack.

At his funeral, there were a number of people who spoke and the underlying essence of 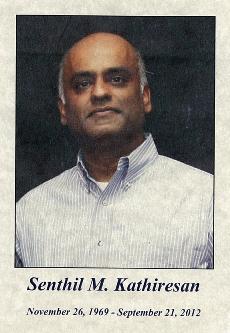 Senthil’s soul was described both in prose and verse as one who was always helpful, caring and giving — unconditional, with no expectations in return.  The gentlemen who conducted the service was one whom Senthil had helped with his own daughter’s funeral several years ago.

There has been a huge outpouring of sentiments at Senthil’s passing, not just because he was young and it was tragic, but in my humble opinion, due to the genuine nature of this great soul.  He lived a life of abundance as his father said at his funeral and many times gave away beyond his means.  He always reassured his father saying, “Don’t worry, everything will take care of itself.”

One of the great credits a parent can give a child, especially from a conservative Indian background, when his dad recognized Senthil as his teacher and guru.  Senthil should serve as a great example to all of us as an example of joy, peace and abundance.

Last night, at my Meetup organized in Senth’s memory titled, “When Bad Things Happen to Good People,” we once again honored his giving nature and touched upon how we can all learn and change the course of our own lives having witnessed Senth’s.  Unfortunately, many times it takes such a tragedy to wake us up from our numb auto-pilot lives.

I pray that more people will see the flame that Senthil fueled and join together beyond the few days after his passing and keep the torch blazing.  I promise to keep reminding you in case we forget.  Let’s not let his life go in vain.

Please “Pay It Forward.”  Just experience the joy of giving, expecting nothing in return.  It’s a great feeling and it breeds abundance and a sense of security that the universe will provide whatever you need to serve the world.  Please notice that I did not say it will give you what you want, it will deliver what you need.

As I pleaded at his funeral, even if each one of us just do a single good deed that Senthil did, the world would be a better place for sure — better than when Senthil left it.

For harmony in your life and our world,

Up Next: It's All Over